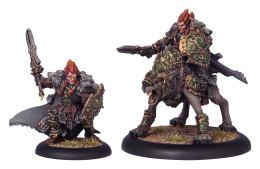 Morraig is an inheritor of an ancient and proud bloodline. War wolves that will barely tolerate the touch of man gladly bear him into battle, accepting his weight and fighting to the death to defend him. He is a pragmatic warrior predestined to lead the Wolves of Orboros to war. Few can match his cleft sword, and the enraged wolf beneath him snaps at any who evade his blade’s edge.