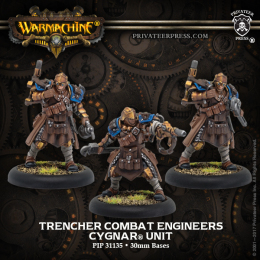 As turn the wrenches of the mechaniks, so turns the war. Trencher combat engineers are even tougher and more combat-ready than their field mechanik counterparts in the regular Cygnaran Army. Every man and woman among them must be as adept with a firearm as they are at maintaining and repairing the warjacks and weapons of the platoon.