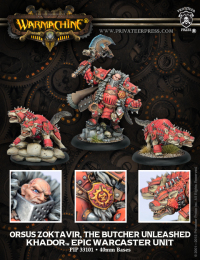 Orsus Zoktavir is a living legend, having earned a place in the company of other almost-mythical heroes from the frozen north. A brutal warrior capable of unbridled savagery, he is feared by his soldiers as much as by his foes. His only companions are his two war argus—two-headed hounds that are a living embodiment of the untamable darkness inside the Butcher.