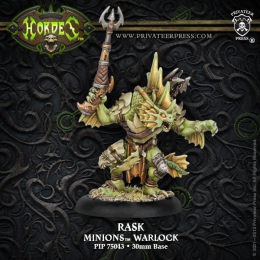 Rask is a mighty bog trog warlock who has traded his people’s freedom for some degree of personal autonomy from the bloodthirsty gatormen. Cold and calculating, Rask is a formidable hunter, a skilled warrior, and one of the most ruthless and self-serving creatures in the Blindwater Congregation. Rask prefers to bring his enemies low through a combination of potent sorcery, peerless knowledge of the terrain, and a host of devious trick and obfuscations. He typically avoids direct confrontation with powerful enemies, preferring to use his abilities to tip the scales in favor of the lesser creatures that serve him. However, once his bog trogs and warbeasts have weakened an enemy, Rask claims the honor of the killing blow with a well-placed bolt from his harpoon gun.