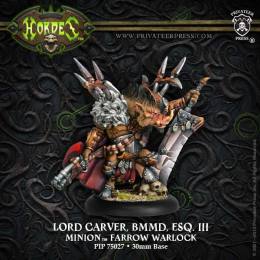 Lord Carver arose from the squalid hordes of the farrow on a tide of determination and violence, leaving behind him a trail of enemies and rivals crushed beneath his sharpened hooves. Carrying powerful weapons wrested from his enemies, the farrow warlord leads his snorting, bloodthirsty army on a campaign to trod all who would oppose them into the muck.