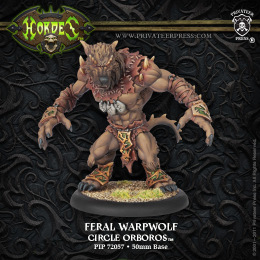 arpwolves are humans that have been transformed into savage beasts well suited for battle. The druids of the Circle Orboros use the vicious feral warpwolves to strike their enemies hard and fast, unleashing them to sow death and discord with tooth and claw. Contrastingly, the white-furred purebloods cut swathes through the enemies of Orboros with measured ferocity and bone-shattering howls. Retaining some portion of their human intellects, the sword-wielding stalkers are stealthy killers that prowl behind enemy lines and strike without warning.

This box set contains three color stat cards and one multi-part heavy warbeast plastic model (PIP 72057). Included are all the components to assemble one of three heavy warbeast variants: Feral, Pureblood, or Stalker Warpwolf. A player may field any number of these heavy warbeasts in a Circle Orboros army.