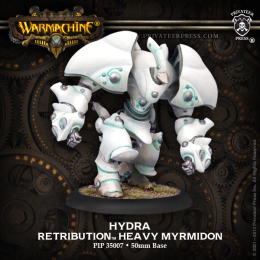 House Shyeel has brought the power of its formidable myrmidons to the Retribution, fighting machines enhanced by sophisticated arcanika systems. The Hydra stores energy in its arcane batteries to unleash a torrent of crushing blows or a singularly powerful blast. The Manticore is equally as formidable in melee or at range, thanks to kinetically augmented attacks and its Cyclone Cannon. The Phoenix enters battle in a blaze of blue-white flames as liquid fire ignites along its massive thermal blade.

This box set contains three color stat cards and one multi-part heavy myrmidon plastic model (PIP 35007). Included are all the components to assemble one of three heavy myrmidon variants: Hydra, Manticore, or Phoenix. A player may field any number of heavy myrmidons in his Retribution army.