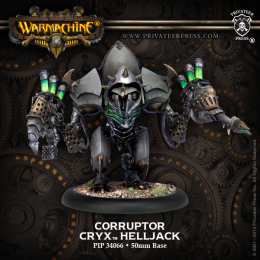 The fiendish inventiveness of Cryxian necrotechs has resulted in many machines perfected to employ the killing arts. The Slayer is a swift, hulking beast of bone and black iron that relishes murdering anything in its path. The Reaper can fire its harpoon to sink deep into flesh or steel before reeling in its victim with frightening speed to within range of its vicious helldriver spike. The Corruptor is the culmination of Cryx’s pioneering work in caustic compounds and necrotic poisons, a helljack armed with venomous weapons designed to consume both body and soul.

This box set contains three color stat cards and one multi-part heavy warjack plastic model. Included are all the components to assemble one of three heavy warjack variants: Corruptor, Reaper, or Slayer. A player may field any number of heavy warjacks in a Cryx army.