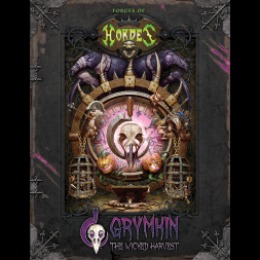 Cast down to the hells of Urcaen by Menoth long ago, the Defiers and their Grymkin armies have risen again to punish the wicked across all of Immoren. Freed by the Old Witch, Zevanna Agha, the Defiers now work toward their own ends. Each is a self-made godlike being who wields the uncanny power to reap what is due from the corrupted denizens of Caen. The harvest of the damned will not end so long as the hearts of humankind remain tainted and debased.

Within these covers, you will find a trove of evocative Grymkin lore and imagery that will prepare you to reap for the Defiers and harvest the sins of the wicked. Learn the shadowed history of the Grymkin and their dark masters, who dared to stand against the god Menoth. Tease out the truth of the horrific Grymkin warbeasts, formed from the Defiers' own tormented nightmares, and acquire the secrets of the magical powers each Defier wields, known as Arcana, by which they reshape battlefields. Unleash the malevolent power of your Grymkin army upon your foes with two specialised theme forces, and take inspiration from a painting guide that will fuel your own maddened creativity as you summon your forces to reap the Wicked Harvest.