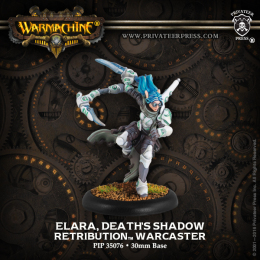 Elara is one of the Retribution’s most skilled killers. She has refined her arcane abilities to suit the ancient traditions of the goddess, Lyliss, patron of assassins, and treats each death she inflicts as a tribute. Elara has mastered the essence of shadow, stepping through one to emerge from another, blades flashing in anticipation of the kill. Though she once considered herself a weapon best deployed on her own, she has learned to fight in perfect concert with her forces, bestowing her powers to quicken their actions and guide them toward the kill.