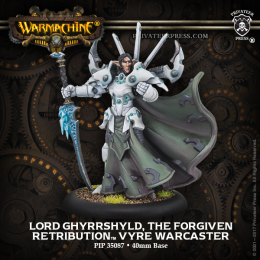 The warcaster once known as Goreshade was an eldritch, one of a strain of abominations who fed on the spiritual essence of others and consorted with the Nightmare Empire of Cryx. Now, Lord Ghyrrshyld has been restored by the goddess Scyrah and is filled with renewed purpose. While Ghyrrshyld does not speak of what happened to restore his body, he now fights against those who imperil Scyrah, and many speak of him as being filled with the goddess’ light.