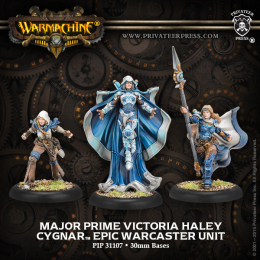 Victoria Haley has risen through the ranks of the Cygnaran Army to become one of the most potent arcanists in recorded history. Her mastery over the flow of time allows her to conjure echoes of herself from the past and future to fight at her side. By her unprecedented powers, Major Prime Victoria Haley bends the fabric of time and shatters the fundamental laws of reality as she outpaces and outfights the foes of Cygnar.