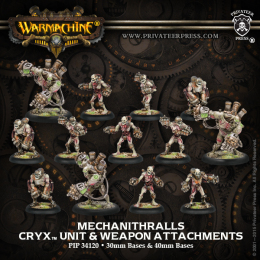 Assembled from a horrific fusion of corpses and machinery scavenged from the battlefield, mechanithralls fill the ranks of the Cryxian army. Their reanimated bodies are augmented with two heavy gauntlets powered by dark energies and steam pressure. These gauntlets greatly enhance their unliving strength; indeed, a mechanithrall’s strike is nearly as powerful as the impact from a steamjack.