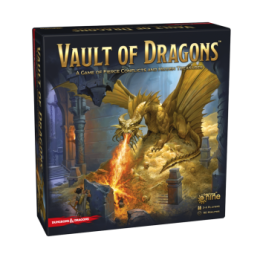 Rumors of a hidden vault of gold circulate through the streets, taverns, and markets of Waterdeep. In Vault of Dragons™, each player chooses one of the four unsavory factions racing to locate the secret of the Vault!

In Vault of Dragons, players take the role of unsavory factions from the streets of Waterdeep, factions who have heard rumors of a hidden vault of gold under the city and are determined to locate it first.

In the game, players send followers to locations in Waterdeep to uncover rumors and treasure. Brawling with other factions to control key locations is to be expected, but beware the City Watch. Double-sided location tiles give players even more places to explore. Uncover the clues and enter the dungeons of the Undermountain to find the vault of dragons.