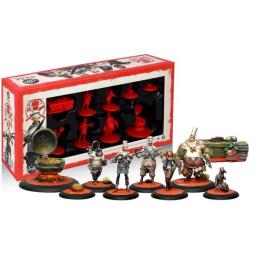 The King’s Pud? Lass, if you’re not familiar with that cup, then there’s no hope for you. That battered piece of tin is older than any soul living, and most of the buildings and statues across the land besides. The name of the original king who commissioned it has long since passed from memory, just the same as his kingdom. Pah, the only thing that kept it safe during the war is that the bloody thing is nigh on worthless.

But the prestige to win it? Ah, now there’s a thing to be sought after, and savoured like a lean joint of venison. To a Chef, the King’s Pud is more important than even the Sovereign States, and the rewards twice as lucrative. Usually it’s only our own who compete for the cup, Chefs from all over travelling to the holder’s demesne to compete. But, now we’ve found ourselves in the big leagues, the field is open to all. So, you’d bloody well better shape up, girl. I don’t intend on letting anyone but our own get their filthy hands on the prize, and I won’t be too happy even if another Chef crew does!
- Wellington, Chef’s Guild Team Captain

The Cooks are the fourth of the Minor Guilds to reveal themselves, after the Ratcatchers, Falconers, and Navigators. Allied with the vicious Butcher's Guild, the Cook's ability to whip up a buffet of blood puts these two Guilds in perfect synchronisation.