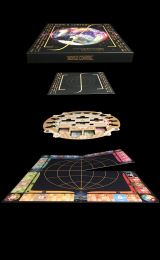 All governments have failed & you take the role of a global Player with private armies & trillions in cash on a quest to take out the biggest chunk of the world by any means necessary.

You can play control-cards instead of rolling dice to plan your moves & leave nothing up to chance. Gain more control-cards & units by trading ressources, that are produced in your cities. Shift your human ressources to more lucrative places by crossing borders & crush your competition with trillions of debt. No possibility or desire to pay your debt? Just declare war & conquer your most favorite global cities. Pre-emptive airstrikes, censoring news, influence via education & religion . . . there are many options at hand to strengthen your position on your goal to total winning.

Players can tweet own fake news at the game to get the latest player-generated event-cards for immediate print & play, so the game never gets old.