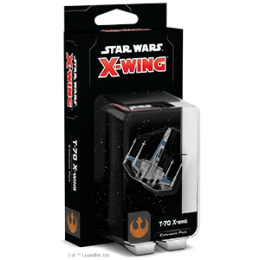 Upgraded for maximum tactical flexibility, the Incom-FreiTek T-70 X-wing can equip a wide variety of astromechs, weapons, and other customizations preferred by individual pilots. These heroes of the Resistance Starfighter Corps have used their X-wings to great effect in countless missions against the First Order.

In addition to the beautifully detailed, pre-painted miniature, the T-70 X-Wing Expansion Pack contains twelve ship cards, including nine unique pilots, six upgrade cards, and the tokens, base, pegs, and maneuver dial you need to grow your Resistance forces. Additionally, this expansion contains a few entirely new cards not seen in the first edition. These cards and associate punchboard are also included in the Resistance Conversion Kit for the benefit of veteran players.