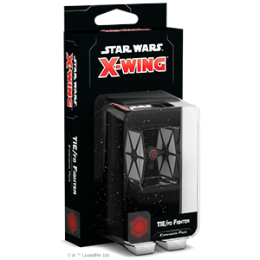 Developed using technologies pioneered for the Empire’s TIE Advanced program, the TIE/fo fighter is a shielded, mass-produced TIE fighter that the First Order can use to spread terror across the galaxy.

The TIE/fo Fighter Expansion Pack includes one fully assembled and beautifully painted miniature and all the ship cards, upgrade cards, and tokens you need to add one of these frightening fighters to your First Order squadrons. The strikingly detailed, pre-painted TIE/fo fighter miniature in this expansion is accompanied by twelve ship cards—including nine unique pilots—and five upgrades, giving you all the raw power you need to begin rebuilding the Empire.