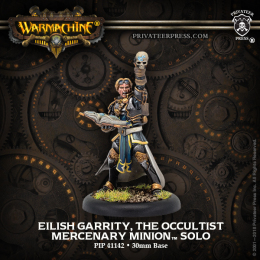 An arcanist, scholar, and experienced sellsword, Eilish Garrity of the Black River Irregulars mercenary company now walks a dangerous road to power. Those who confront him in battle discover that his scholarly demeanor belies his potent arcane skill—which some suggest was earned through nefarious means. He insists he is wielding his power for the greater good, though it seems a dark path he treads.