The Navigator's Guild: Tales of The New World 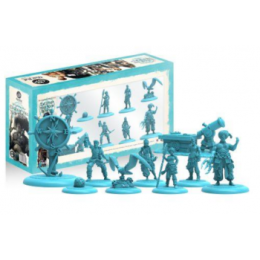 6 players (Windfinder, Horizon, Fathom, Wander, Azimuth, Ebb)
Ball (Bouy) Goal Token (Helm/Compass)
3D Terrain Piece (Desk & Spy Glass)
Cards, Tokens Health dials for all players
The Minor Guilds are an exciting brand-new expansion to the game of Guild Ball. In their constant arms race to have all the best players, each of the existing Guilds has allied themselves with a Minor Guild to bolster their chances of victory. Each Minor Guild plays as a standalone team, each has a Captain, a Mascot, and four other players. There is also a capacity for the Major and Minor Guilds to loan players to each other.

The Navigators are the third of the Minor Guilds to reveal themselves, after the Ratcatchers and the Falconers. Allied with the capricious Fishermen?s Guild, the Navigator?s ability to steer themselves through hostile territory to slot home perfectly aimed goals puts these two Guilds in perfect synchronisation.