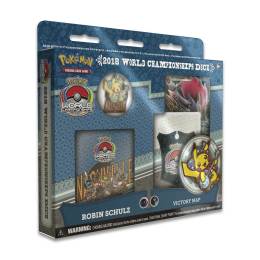 The powerful combination of Zoroark-GX and Garbodor has been a dominant force in the tournament scene, and Robin Schulz of Germany guided it to victory in the Masters Division to become the World Champion! Using Zoroark-GX to dig through the deck and Puzzle of Time to retrieve cards from the discard pile makes it possible for this deck to run single copies of several utility cards, including its signature Town Map. And once the opponent has played enough Item cards, Garbodor can finish things off with a huge Trashalanche attack!

This deck features a limited-edition card back. These cards are not tournament legal.