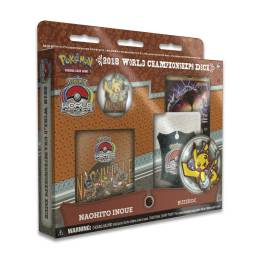 Naohito Inoue of Japan faced a mirror match in the Junior Division finals, but his Buzzwole/Lycanroc deck came out on top and made him the World Champion! This deck features lots of battle-focused Fighting-type Pokémon and plenty of ways to power them up, with Diancie Prism Star and Strong Energy offering a nice damage boost, and Brooklet Hill searching out any Basic Pokémon in the deck. And if the opponent happens to have exactly 4 Prize cards left, Buzzwole can hit really hard for a single Energy!

This deck features a limited-edition card back. These cards are not tournament legal.