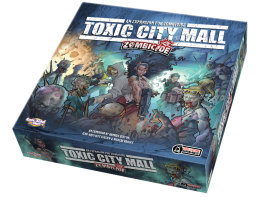 Toxic City Mall offers new content and game modes to expand your Zombicide experience. The mall is infested with toxic zombies, bizarrely mutated monsters that release toxic blood sprays when killed. Keep your distance and aim carefully! Lucky for you, four new survivors are joining the party with new weapons and new skills.

The toxic threat calls for maximum power! Toxic City Mall introduces the Ultrared mode, allowing your favorite survivors to keep on gaining experience and skills after reaching the Red Danger Level. It also features the Zombivor rules (also included in Zombicide Season 2 : Prison Outbreak): upon defeat, your survivors can get back to the fight as zombie heroes with rules and skills all their own.

The once joyful and colorful mall has suffered from the zombie invasion. Desperate battles occurred here. Toxic City Mall includes barricades and rubble tokens to alter the boards and change your team tactics. Of course, you can use such tokens with any Zombicide tiles, published missions, and missions of your own invention!