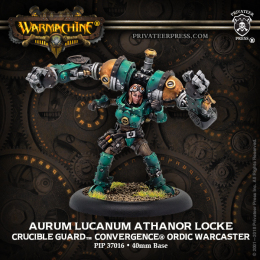 Aurum Lucanum Athanor Locke is a young and accomplished arcane mechanik and warcaster who also happens to be a pious Cyrissist. Outfitted with a custom-built and augmented armor frame, Locke is not only a Crucible Guard warcaster, but she leads the arm overseeing the fabrication of the Crucible Guard’s warjacks. While her faith is known to her peers, they do not suspect she acts as a secret observer and agent for the Convergence of Cyriss, bringing them intelligence from within the other organization. Her skill with machinery and engineering both on and off the battlefield has made her a highly valued asset to both groups.