The Hunter's Guild: Heralds of the Winter's Moon 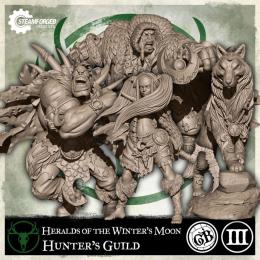 Ruthless. Cold. Calculating. The Hunter's Guild are hit-and-run tacticians who never hesitate to exploit an opponent's weakness. From laying down traps to pinning down players, their go-to strategy for victory has always been closing in for the kill--until now. A new line-up of feral talent has descended from the frozen north with a simple yet dangerous approach: you can't stop what you can't catch.

Focused on the ball and controlling the pitch, this new pack of Hunters gives coaches four new players (1x captain, 1x mascot, 2x players) to show rival Guilds just how cruel the winter can be.

Skatha - The new captain, a fluid footballer lending swift feet to her team.