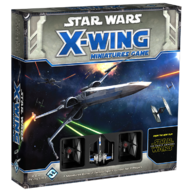 Featuring beautifully detailed painted miniatures, X-Wing is a two-player game of dramatic starfighter battles set in the Star Wars universe. You and your opponent take command of Resistance X-wings and First Order TIE fighters, then battle head-to-head for the fate of the galaxy.

Secretly plot your maneuvers, fly at your enemies, take aim, and fire. It takes just minutes to learn the rules, but the nearly limitless possibilities for squad building, along with the ability to expand your fleet with other ships from the game’s expansions, ensure that you’ll find plenty of Star Wars action to explore and enjoy for years to come!

Man your ships... And may the Force be with you!

X-Wing is a two-player miniatures game of fantastic, high-speed dogfights. Now, for the first time, you can enjoy these dramatic space battles with the incredible new starfighters from The Force Awakens!

The Force Awakens Core Set is the heart of your X-Wing experience and contains everything that you and a friend need to start playing, including three painted plastic ships – one Resistance T-70 X-wing and two TIE/fo fighters.

Painstakingly and faithfully created at 1/270 scale, these miniature starfighters come to life with intuitive rules, individualized maneuver dials and templates, and custom dice that make your combats fast, deadly, and exciting. Each ship has its own maneuver dial, and each type of ship boasts a unique range of maneuvers. At the beginning of each game round, you secretly select your ship’s speed and bearing, locking it into the maneuver dial. Then, after you and your opponent have assigned maneuvers to all your ships, you reveal and execute them, starting with the lowest skilled pilot. Whether you rush headlong toward your enemy to shower his forward deflectors in laser fire, or dance away from him as you attempt to acquire a targeting lock, you’ll be in total control throughout all the tense dogfighting action.

Want to customize your ship and crew? In addition to its miniatures, maneuver templates, and custom dice, The Force Awakens Core Set contains more than a dozen ship and upgrade cards that you can use to send your ship into battle with different pilots, droids, and tech. Each of these cards has a specified squad point cost, and as you assemble your squad, they’ll present you with a range of compelling decisions before you even fire up your engines.

A Blue Squadron Novice outfitted with the Weapons Guidance tech upgrade costs the same twenty-six squad points as a Red Squadron Veteran but trades the Veteran’s higher pilot skill for the ability to spend a focus token to change a blank die result to a hit when he’s attacking.

Take Your Games to Hyperspeed!

With its easy-to-learn rules and beautifully detailed components, The Force Awakens Core Set quickly immerses you in the tense, fast-paced dogfights between Resistance and First Order starfighters. Then, once you get started, the galaxy is yours to explore! The Force Awakens Core Set features advanced rules and special missions that let you take your game to the next level. You can further increase your gameplay options by expanding your fleet with starships from Star Wars galaxy, past and present. Many of the galaxy’s most famous starfighters and pilots are available in the game’s expansion packs.

In addition to giving you the option to expand your Resistance and First Order squads, these packs allow you to command the most iconic heroes and villains from the classic Star Wars movies. With these expansion packs, you can call upon the heroes of the Rebel Alliance, the deadliest aces of the Imperial Navy, and even the bounty hunters, pirates, and mercenaries of the Scum and Villainy faction!

Lock on Target
Whether you’re a new player or a veteran of many dogfights, The Force Awakens Core Set is your entry to the thrilling and intense starfighter battles being fought between the forces of the Resistance and the First Order. Strap yourself into the cockpit of a T-70 X-wing or a TIE/fo fighter, and go fight for the fate of the galaxy!

• A two-player game of high-speed Star Wars dogfights set during The Force Awakens
• Three highly detailed and pre-painted miniature starfighters, one T-70 X-wing and two TIE/fo fighters
• Maneuver dials and templates make it easy to plot and execute your ships’ maneuvers • Combat is fast and deadly
• A pre-existing range of expansions and rules for squad-building allow you tremendous freedom to explore different squad-builds, strategies, and even new factions