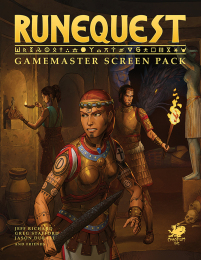 More Than Just A Screen

The Gamemaster Screen Pack enhances your games of RuneQuest with scenarios, setting information, reference tables, and maps that increase the flow of play, and help to immerse you in the mythic world of Glorantha!

The gamemaster screen is a landscape, four-panel cardboard screen, 34 inches wide and 8.5 inches tall, with an illustration of the famed Gods Wall facing the players. On the Gamemaster side, all manner of important references and summaries of key rules are at your fingertips.

The first half of this 128-page book is a description of the Colymar tribal lands, led by Queen Leika Blackspear. It details the fortress city of Clearwine and its important denizens. Nearby is Apple Lane, a small village with huge problems ready to be solved by wandering adventurers.

The residents and surroundings of Apple Lane are described in detail, making it a perfect location for Gamemasters to base RuneQuest campaigns, establishing the adventurers in a renowned yet manageable hamlet with ample opportunity for great adventure.

The second half contains three adventurers. You can play them separately or link them together in your campaign.

The first adventure, Defending Apple Lane, pits the adventurers against a savage band of fearsome raiders.

Cattle Raid sends the adventurers to protect a sacred herd of cattle, a seemingly simple task that grows complex when tribal politics come into play.

The Dragon of the Thunder Hills involves dragon magic, old ghosts, and the potential for adventurers to begin all-new cults.

Additional materials include a 20-page reference booklet full of charts and references for ease of play, a 16-page Gloranthan calendar, seven ready-to-play pregenerated adventurer characters, regular and deluxe adventurer sheets, squad and a non-player character sheets, as well as fold-out maps of Apple Lane, Clearwine, Dragon Pass, and the world of Glorantha itself!